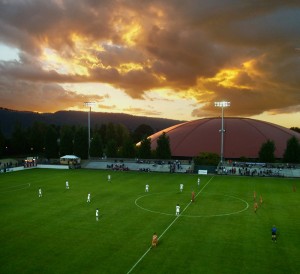 I grew up playing soccer as a little girl. Turns out, I’m extremely competitive, due to the fact that I was the youngest child and had two older brothers to keep up with when it came to just about anything.

My competitiveness was harnessed in the form of soccer, starting at the age of four, and continuing through college. My brothers lost interest in the sport by high school, but I had dreams of wearing that National Team jersey right along with Mia Hamm.

I had a few coaches in my career that made an impact on my life and the way I approach it because of their coaching philosophy. For example, Kim was a coach I had for a summer team. She was a yeller. Now yelling isn’t really my ideal coaching style, she kind of reminded me of a chihuahua, constantly barking out orders. However, the thing that Kim did really well was that she made her players explain their actions. We would be in the middle of a practice scrimmage, and it didn’t matter how long we had been playing, she would stop the play, put everyone back where they were right before she called time, and then would focus her attention on the player who had last touched the ball. The pressure would be on, because there was an audience of at least 15 other players listening in on the conversation; she would proceed to ask the player why they did what they did. Maybe she would ask if they had the chance to do it over again if they would have made the same choice. If the player had an explanation for why she did what she did, she might get off a little easy. But if Kim stopped the play and the player who had just made a pass or a run down the field didn’t have a good reason for doing so, she better watch out!

Kim’s point was that each player’s actions on the field needed to be purposeful. Every run, every pass, every touch on the ball needed to count for something. One might only get a touch or two before the ball was stolen to the other team. What she engrained into me was that if I didn’t have a plan for what to do when I got the ball, if I wasn’t looking for the run to make, I was not being the player I could be. I was not playing up to my fullest potential.

Fast forward to my college coach. He was very concerned about how purposeful we were with our technique on the field, the runs we made and the shots we took, but he took the intentionality one step further. Clive cared about the development of his players as people. On one of our practice days my Freshman year, he loaded us up in a couple of vans and drove us to the children’s hospital down the way. We brought Portland Pilot soccer balls and pendants that we would autograph for the kids on the oncology floor. They had the brightest smiles on their faces when we walked into the room! They lit up at the sight of “celebrities” (little did they know that they were the real famous ones.)

When we had finished handing out all of the plush soccer balls and team pictures autographed with Sharpies, we huddled in the parking garage before heading back to campus. Clive gathered us close together and told us to remember this day. He told us to think twice the next time we felt like complaining, and that on our worst day, we were still doing better than any of the kids that we just visited who were fighting for their lives. Those precious faces would never see the outside of a hospital room, and yet they were the happiest kids around when we popped in for an hour to visit with them.

One year later, my soccer team found out some shocking news from our incredibly gifted coach. Clive had been dealing with cancer for a while, and things weren’t looking good. He had been teaching his players life lessons for years, and now, more desperately than ever he was seeing he did not have much life left in him. Clive poured his heart and soul out on the field and to his players. He lived a life that impacted more people than I can imagine. He lived a life of purpose and intention. He was a true teacher, and I am honored to have been his student.

Are you living a life of purpose? Are you imparting your knowledge to others? If you’re wondering what you have to give to others, I ask that you take a pause and really think about it. You never know whose life you can impact for the rest of their life.

Thanks Kim and Clive.

Ignite Life Coaching offers a presence that is dedicated to helping you find your passion and a process directed towards your unique purpose. Ignite brings change and movement to your life, in a powerful way.

Yesterday was a long rainy day in Phoenix…but as

Hello friends! I hope you’ve had a nice break fr

My sister in law mentioned this quote recently and

Wow folks! A friend informed me she was the 500th

What does it look like to have enough? Have you th

I heard this lyric from a song this morning and it

Have you grabbed a still moment or two before the

Before the end of the year slips away, take some t

I was listening to an @emilypfreeman podcast episo

Okay. For some of us, this comes easy; we make a t

Do you ever feel like where you are and where you

Now that these two sons of mine are BOTH jumping i

Have you ever wondered what your notepad sees when

Every Monday afternoon I get a few hours to sabbat

Do you find yourself often thinking lately that yo

There are a lot of opinions and loads of divisiven